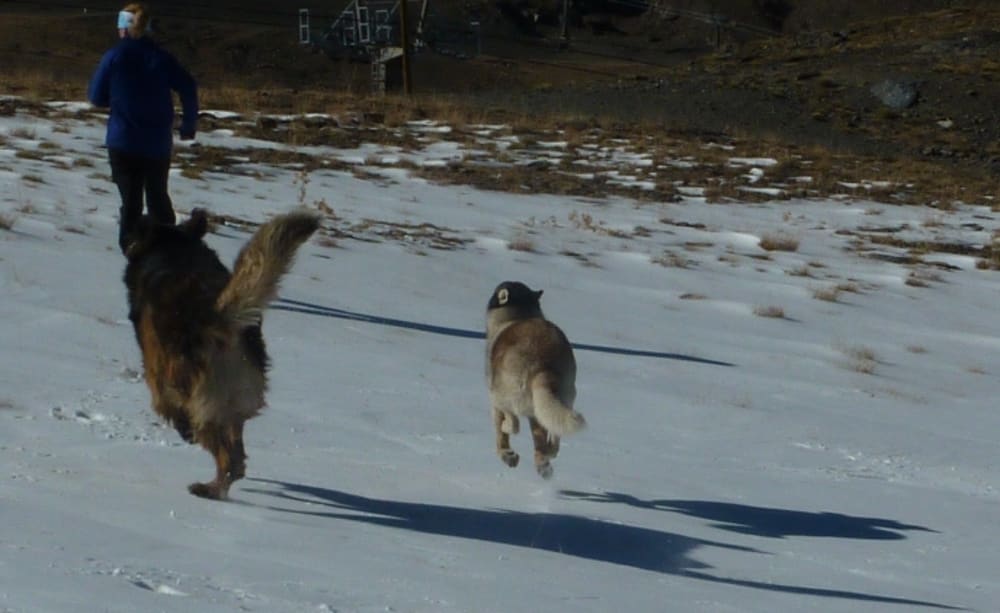 A doggie day out in the mountains

We had to go in and extract a client who had very bad blisters, so we took the Khumbu and Bruno with us for a day out.

We had to go in and extract a client who had very bad blisters, he was on a 5 day traverse of the Sierra Nevada, so we took the Khumbu and Bruno with us for a day out. We left Lanjaron at 9am sharp, drove to the Hoya de Mora above the Sierra Nevada Ski Station near Granada and parked the car as you can go no further by road.

The dogs were very excited as this was their first "winter" walk since the summer, Khumbu made us walk a little faster than we would have liked, but thats what you get for owning a Siberian Husky. We walked for about an hour and half up and beyond the telescope area, that is set up in the mountains, and dropped down in to an area I love called the Lagunillas which has lots of lakes and great views.

We met up with the client, he and Richard started walking back out at a very slow pace (due to the blisters), so I continued on for a while until I hit the lakes. Khumbu and Bruno loved it, they were in and out of the water, Bruno almost had a swim whilst Khumbu slip slided about on some ice. I started to head back after half an hour or so, and caught up with the others.

We stopped at a patch of snow so the dogs could have a good old romp about. The patch of snow is there because the ski station is making snow in an attempt to be open at the end of this month, with the temperatures we are getting at the moment its not looking likely. I let Khumbu off the lead, having assessed the area we were in and deciding it was safe to do so. I ran around on the snow and Khumbu and Bruno chased me, they were having a great time but alas it was time to move on. It took us 2 hours to get back to the car where we sat outside a little bar, had a drink and watched as Griffon Vultures flew over head, I ran to get my camera from the car but missed the best opportunity for photographing them, although they did briefly reappear again but a long way off. I did mange to get a shot of a pair of Choughs though. Khumbu and Bruno were shattered having exerted themselves so much enjoying themselves. Needless to say the dogs slept very well that night. Its great to be able to take them out with us into the mountains, they seem to love it as much as we do.

The Thundering Herd: Any day out in the mountains is a good day as far as The Herd is concerned.