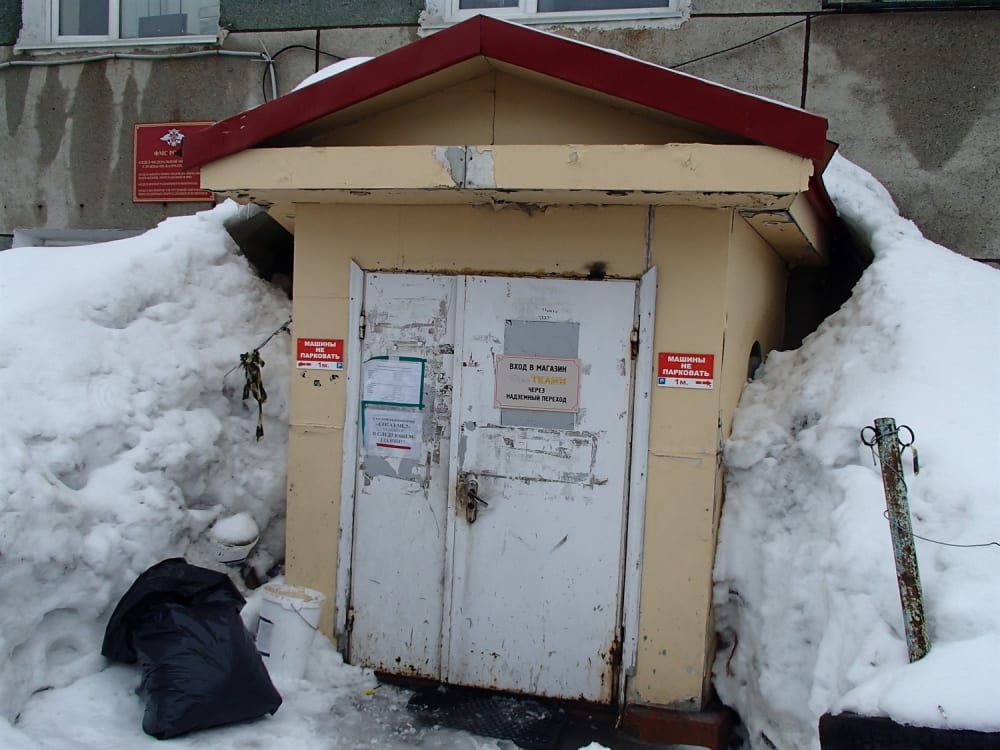 Back to the centre of migration

Richard's birthday today and we have to go back to Petropavlovsk to the Centre of Migration for him to get his finger prints taken which they forgot to do last time. Elena arrives and we all head off for a tourist day in Petropavlovsk. It's a grey drizzly day. We get the local bus into Yelizovo, then swap buses to get to Petropavlovsk. First stop is the Centre of Migration where Richard not only gets his finger prints taken but also his palm print!!! Next we head to an Orthodox Church to have a look at. We take some fun photos outside. Then on to the tourist shops. Boys want Russian hats, me and Jules want Kamchatka t'shirts.

I was shocked on entering one shop as it was full of stuffed wolves, bears, wolverines, moose, and fox, the furs of the wolves, bear, wolverine and fox also. Made me feel ill. I never understand hunting, especially in place like Kamchatka that has such wonderful wildlife and untouched land, surly you can make more money bringing tourists to see these animals alive rather than shoot them and get them grotesquely stuffed? If hunting is allowed to continue the way it does in Kamchatka then they can kiss their wildlife and the tourists goodbye. I believe due to hunting that Kamchatka has no big old (30/40 years old) brown bears left because they have all been killed!! 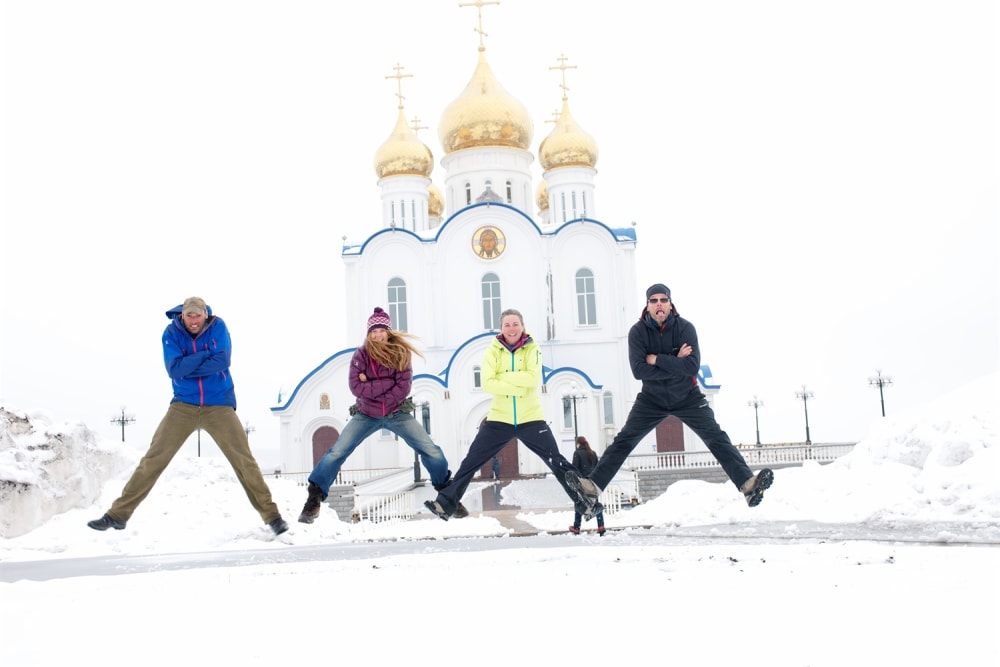 We go for lunch in a cafe and meet up with Igor to discuss the plans for the rest of our stay. Once again the weather is not good but there maybe a small window at the weekend for a 2 day ascent of another volcano. We head home having brought nothing from the tourist shops. Warwick and Elena are cooking dinner, a roast, we are having a small party for Richard's birthday. Igor came over and gave us a slide show, he had the chance to fly in a helicopter over Tolblachik during it's eruption. Richard didn't want a birthday card, so he got an Easter card instead that everyone signed, he also had a cake! So it was the usual drink lots, eat lots and have vodka shots. Andre played his bayan with incredible passion (it's a type of chromatic button accordion developed in Russia). This was our last night as guests at Andre's house, tomorrow we move to Marthas. 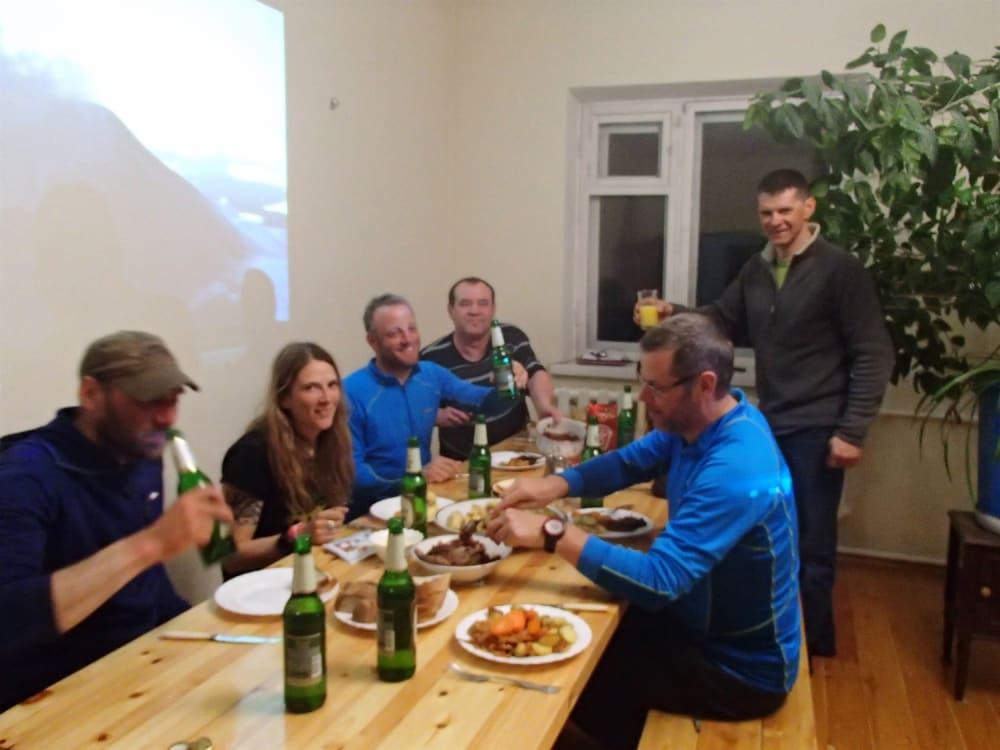 Some sluggish heads this morning, but not mine. I listened to the locals who say never mix beer and vodka, so I didn't! Everyone going to the ski centre, I'm staying home, going to help Martha move our stuff to her place. Went with Martha and took her two beautiful dogs for a walk, feels good to be out with dogs again. The others come back from skiing, Richard not well. Tonight we go out to eat at a restaurant, a treat from Martin. Restaurant does not take credit card, none of us have any cash, lots of nervous giggling and wondering how long we have before we get arrested and if we could do the washing up in return for payment. Emergency phone call eventually made to Martha to bring some cash and bail us out. Early to bed as it looks like a weather window for the 2 day trip will arrive. 5am breakfast!! 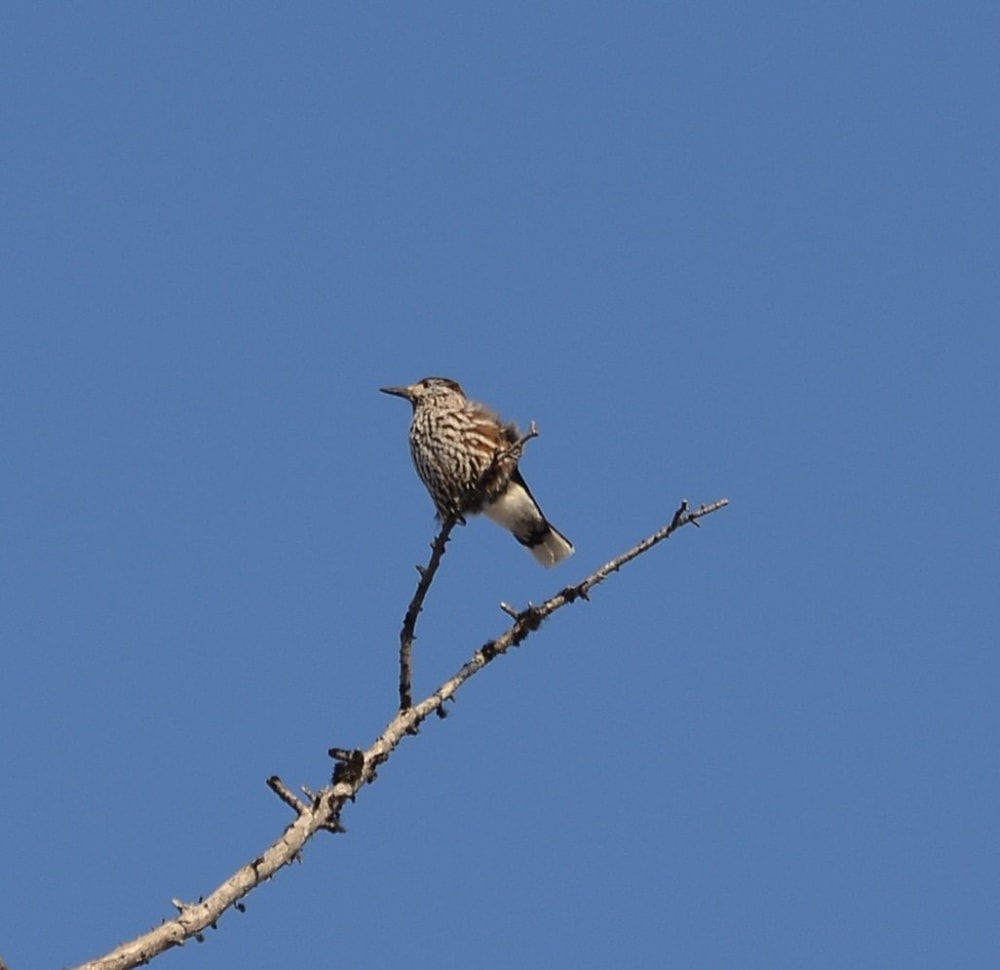 Nothing to do with this part of the blog, but if anyone knows the bird please let me know what it is 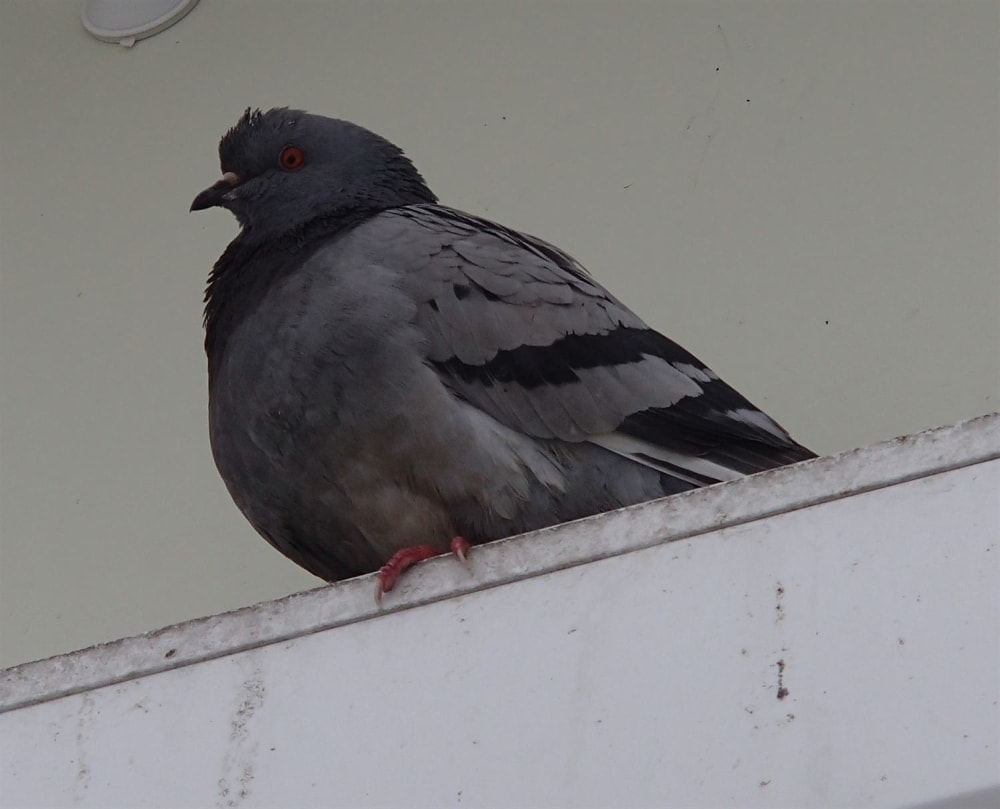 26th April :- Richard still not well so we are not going on the trip. I got up and had breakfast with everyone. After they had left I went for a drive with Martha somewhere to take the dogs for a wonderful walk. Would so love to see this area when it is not in the grips of winter. Very cloudy today. Richard has slept for 12 hours. I didn't do a great deal other than read, sleep and use the internet. Richard felt better around 5pm. Martha was heading out so asked her to pick us up a bottle of Chilean wine. Wow that wine was good. Early night again. 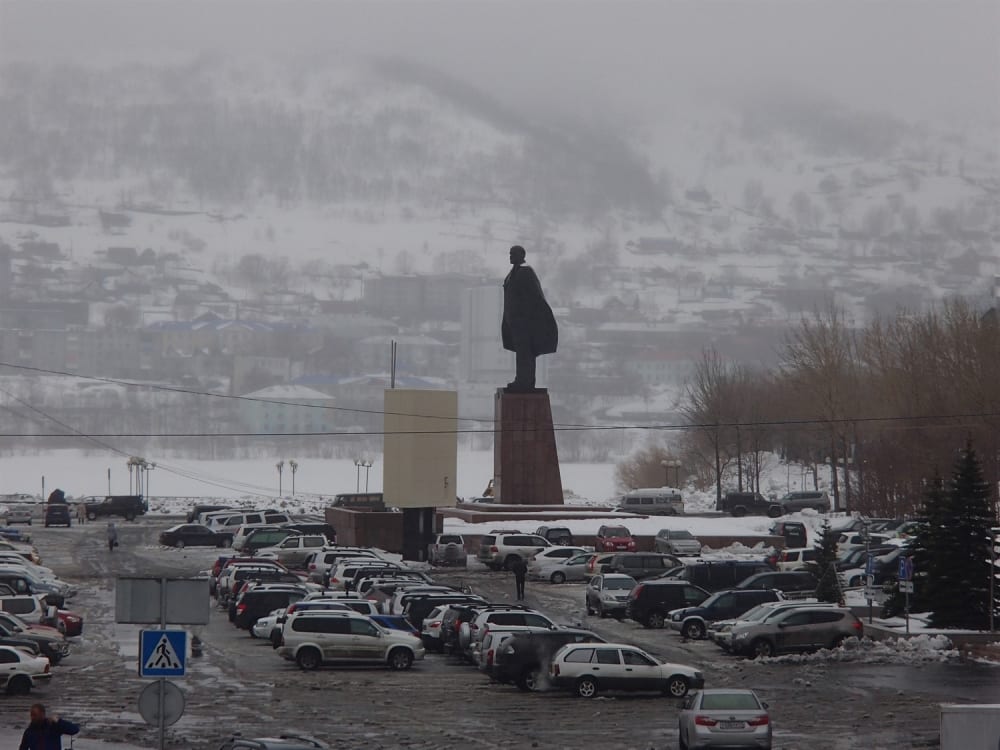 Lenin statues seem to appear all over 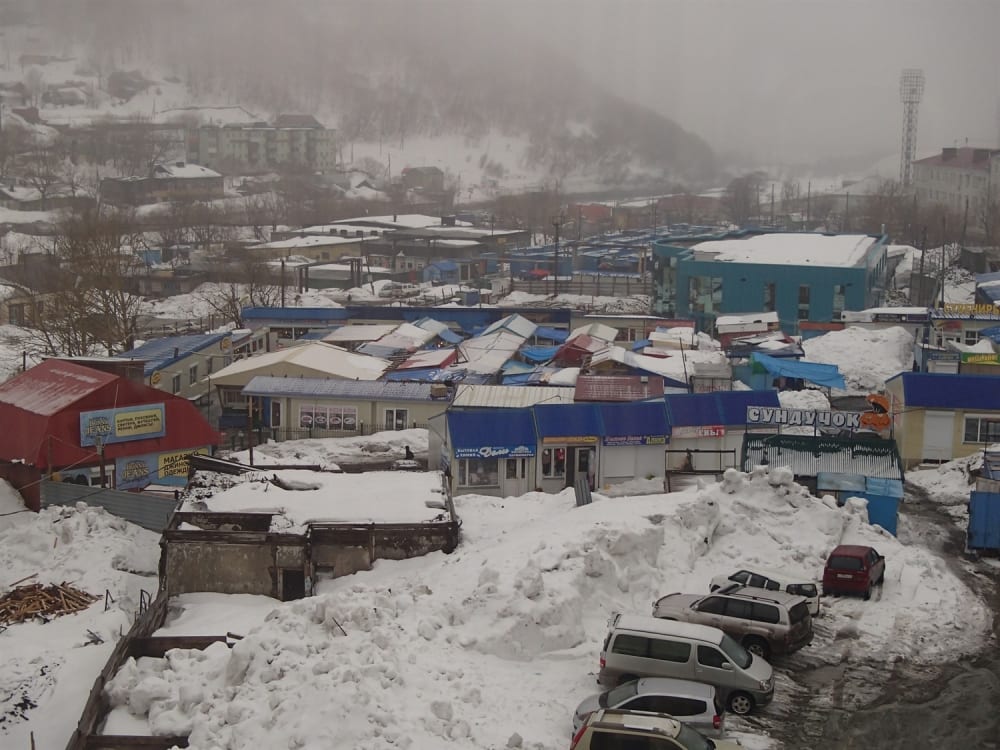 One of the markets we went to

Had breakfast around 9am, another day of hanging around. Weather looks to be picking up. Jet washed the ski bags off. Took the dogs for a walk again with Martha and saw what I believe to be a Rough-legged Buzzard, the only bird of prey I've seen. Prepared dinner for when the others get back. Julia, Warwick and Martin arrive back, no summit, Julia unwell. On the first day they got to the shoulder around 2000m but turned back due to the late hour. The next day they didn't get far due to Julia being unwell. Those guys were very tired so an early night again. 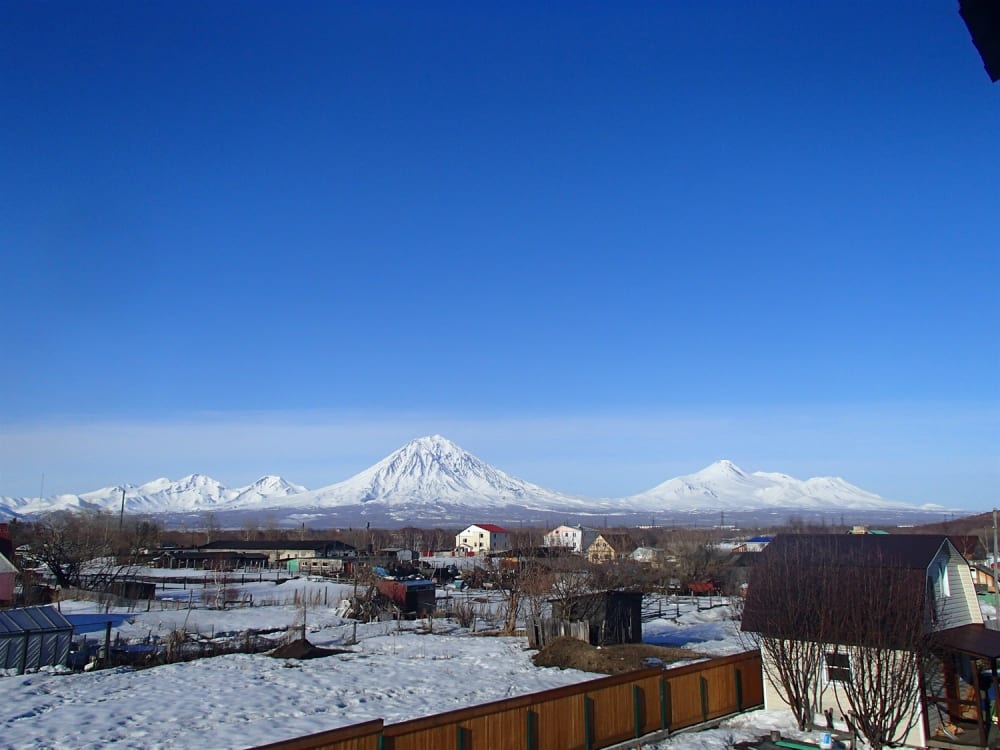 Well here it get's interesting because for some reason I stopped writing my diary, so I'm having to rely on my memory and Julia's memory, which between us is not great ha ha. So I'm sorry this will be a quick ending. Today we are going to have a bbq so Martha took us shopping to buy food and drink. It was great getting to see the different shops and markets. After shopping we packed up ready for our departure from Kamchatka to Moscow the following day and then we just messed around until time for bbq. We had a great evening eating and drinking lots.

We leave Kamchatka. We said sad farewells to our wonderful hosts. Outside the airport a stray dog decided that the pulk was nice and comfy and that he would like to come home with us, unfortunately we had to get him to move and leave him behind. There was the usual chaos at the airport with trying to get a better deal on our excess luggage and I tried to book a vegetarian meal for all of my onward journeys. The long flight back to Moscow was pretty uneventful, watched movies and got a veggie meal! We were picked up at Moscow airport by the hotel we were staying in, although they seemed to have forgotten how much luggage they had so had to send for another vehicle. Again we ate and drank and said our farewells to each other because our flights are at different times of the day.

Richard and I are transported to Moscow airport at some unearthly hour and soon run into trouble at checkin with excess luggage. The visa card would not work, even though the bank had been notified to expect action in Russia, we are told there is a bank downstairs, so we head to the bank but it is shut because it is very early in the morning. We wander around the airport thinking how the hell are we going to get out of Russia when we stumble upon a money exchange place that had just opened up. We changed some euros, ran back to the excess luggage place, while there I noticed a man with 2 guards being checked in to our flight! Anyway we then back to checkin with our receipt of excess luggage paid, checkin, go through security (full body scanner) and just about manage to catch our flight. Once on board we are told our plane is going to be taking a detour to Prague!!! What did our plane get hijacked?? or was this the work of the guy with the two guards. Anyway more time is added on to our 5 hour flight so we just settle down as there is nothing we can do about it.

What can I say about this trip? It has been very very tough at times, the weather was particularly unstable that year, Spring was late in arriving, the scenery is stunning, it is worth every hardship we have endured to be able to see and experience what we have. I absolutely love Kamchatka and it's people, it is somewhere I have to go back and visit again. Thank you Julia Pickering for the invite on your expedition. 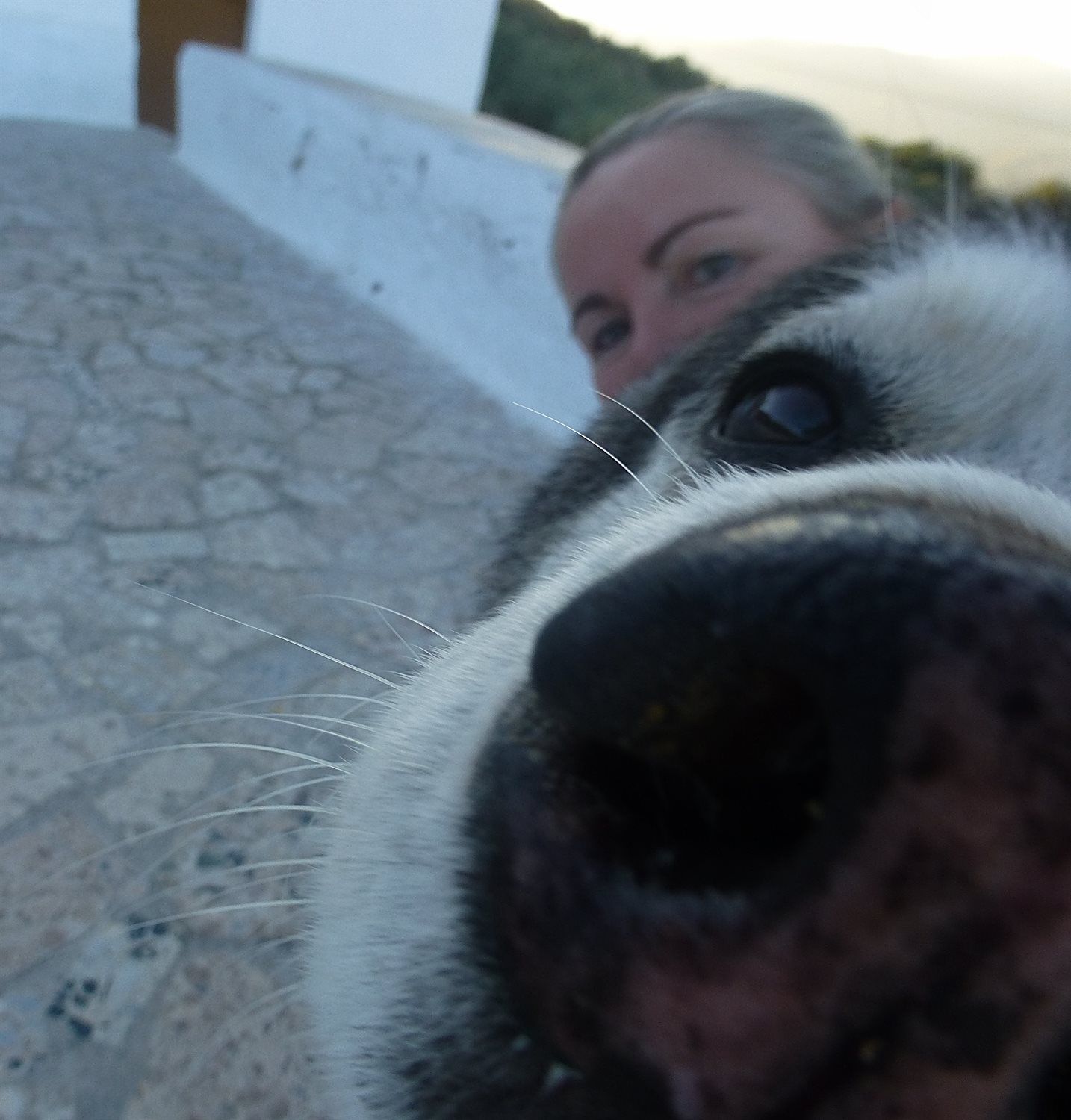 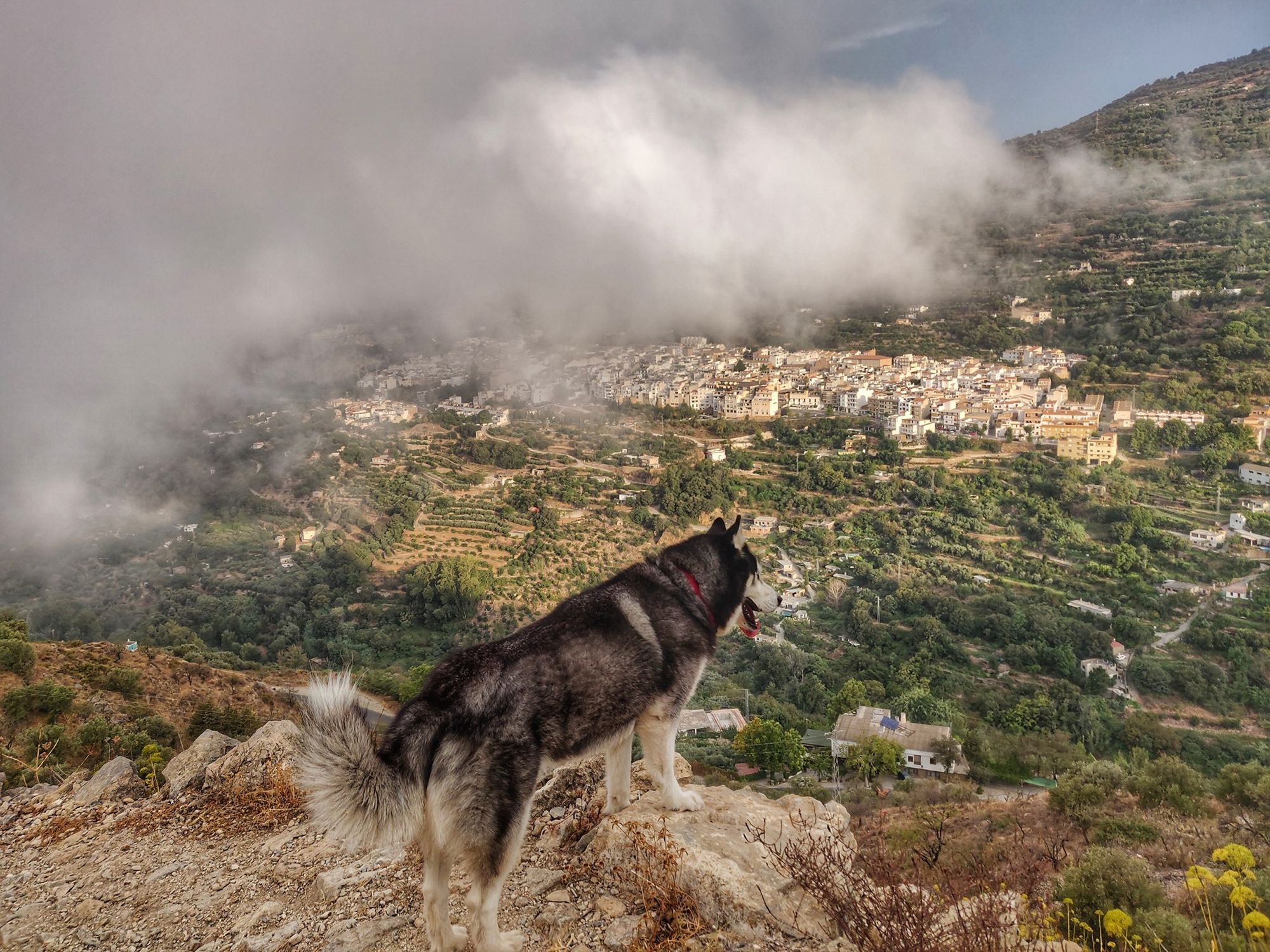 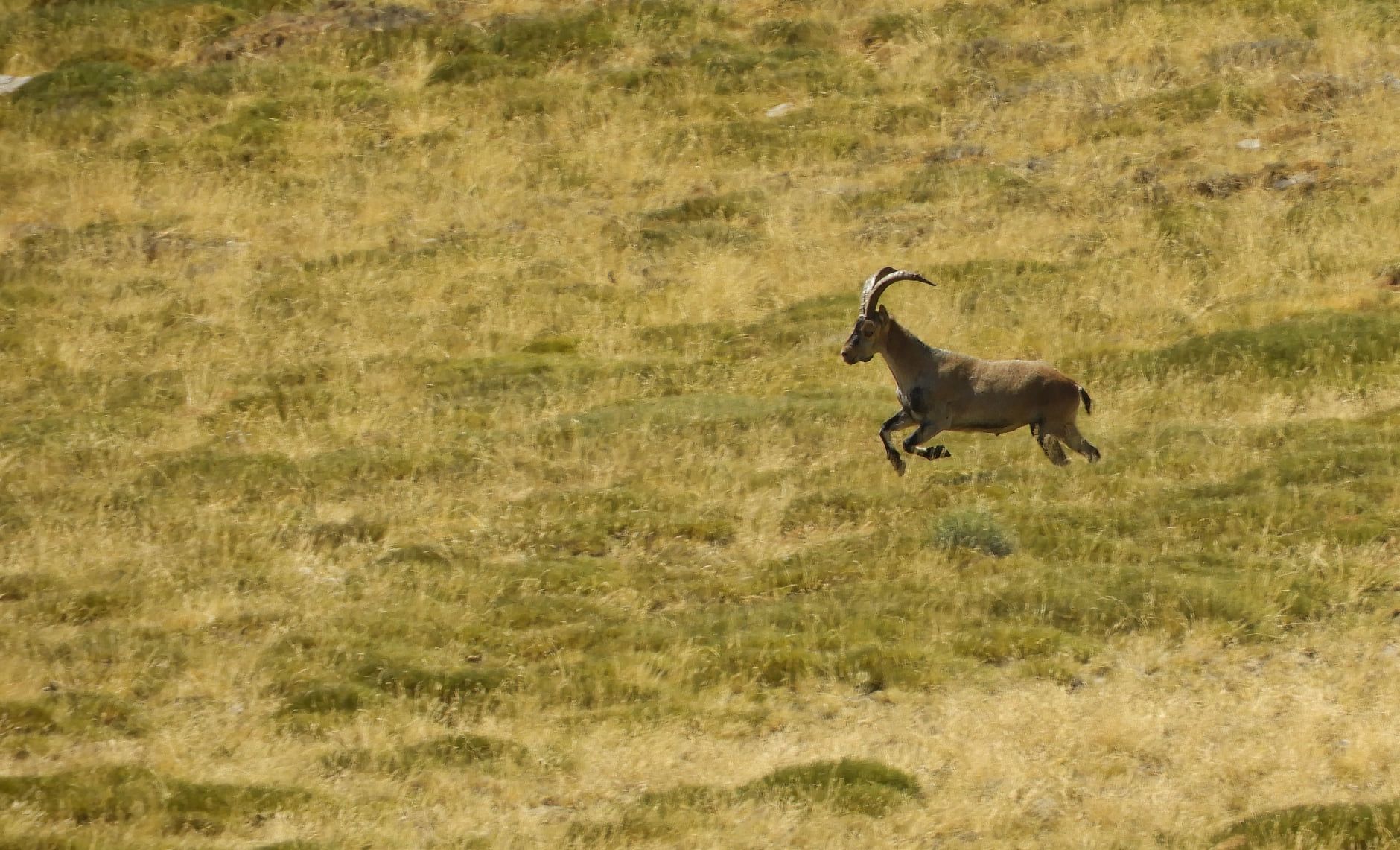