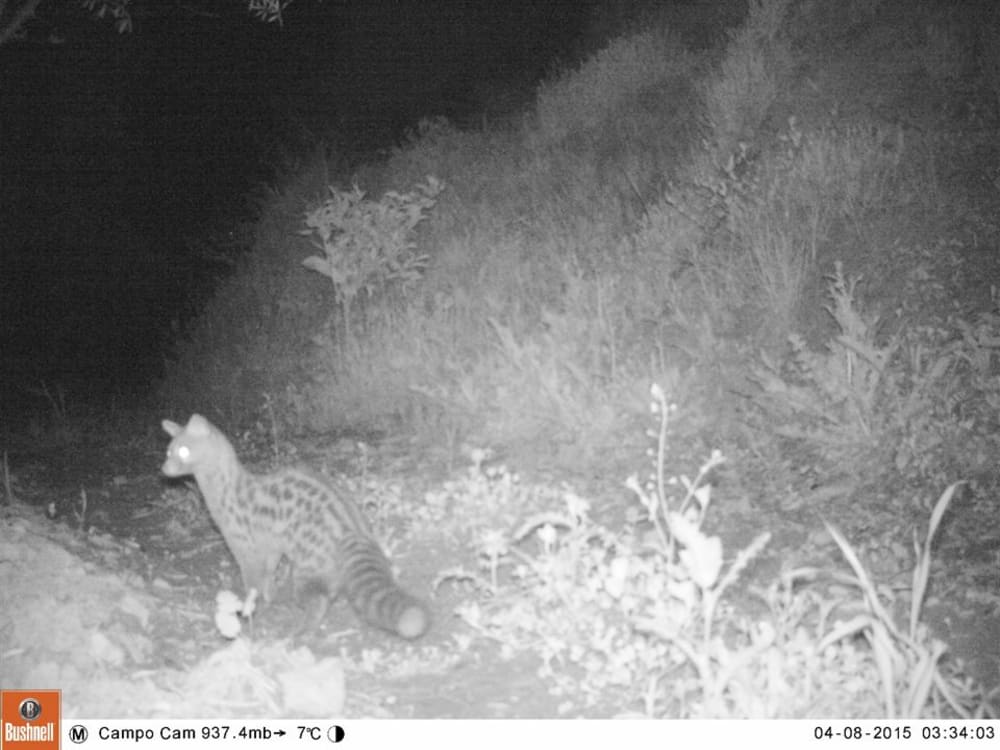 What night time visitors do we get in the garden?

Have you ever wondered what night time visitors you get in your garden? Well I did, I know we have them, they leave evidence behind, some more so than others! So I set up a camera trap that I'm lucky to have and hope never to have stolen.

Have you ever wondered what night time visitors you get in your garden? Well I did, I know we have them, they leave evidence behind, some more so than others! So I set up a camera trap that I'm lucky to have and hope never to have stolen.

The original idea of having the camera trap was to locate where my Booted Eagle was nesting and attach it near there (obviously before nesting season so as not to disturb them), but that is still work in progress. In the meantime to learn how to use this I set it up in our campo, please excuse some of the dates that appear, we have not moved on twenty odd years. The biggest visitor without a doubt has been Mr Juan Jabali (Jabali = Wild Boar) or JJ for short. I knew he was visiting because of the destruction he left behind, so campocam was placed in his favourite area. As you will see he is enormous. I think it's fantastic that JJ has chosen to visit our land, mind you I wouldn't want to bump into him at night! We have put him to good use, he helps to rotivate the land, we water an area, he will rotivate it for us.

They can do quite a bit of damage but they are looking for easy soil to root through. Generally they are not after the vegetables, but grubs and roots that are below the soil, just sometimes they dig up the veggies because the soil they have been planted in is soft. The soil in our area can turn to concrete very quickly, especially during the summer, so nicely watered vegetable plots are an easy visit. I had to stop posting about Juan because local people saw the posts and wanted to shoot him! He has safe passage on our land.

A number of foxes have made their way through the land. This pair I named Mr and Mrs Scratty, the reason why you will see in the video.

Recently a wild boar has been visiting again, I was keen to find out if it was JJ or another. I placed campocam in a different part of the campo to see if we could capture him/her. Unfortunately he has not been back since, but campocam did capture two very exciting creatures which I have never seen before. First up was a Genet which has been visiting almost daily in the early hours. If you have not heard of a Genet before it is closely related to Mongoose. They are mostly nocturnal, have extremely long tails, are very agile and opportunistic feeders. They mostly prefer small mammals, but will eat birds, bird eggs, scorpions, centipedes, figs and olives! It is a disaster if one should ever get into a chicken coop. The locals here generally do not like them because of the carnage they can cause with chickens. Well me, I think once again it's fantastic that these animals are living so close to us. If you don't want your chickens eaten, then make your chicken pen Genet proof.

The final night time visitor so far has been a fantastic Beech (or Stone) Marten. I had to get this identification from The very helpful Iberian Nature Forum as I had no idea what it was. Again mostly a nocturnal animal, more of a plant eater than the Genet, but will plunder birds nests and take smaller birds. My biggest fail has been trying to capture a European Eagle Owl which comes at certain times of the year and uses our TV areal as a convenient perch. I have yet to find a substantial pole to attach campocam to that can withstand the wind, movement and weight of the camera trap. Hopefully by next season I will have come up with a better idea. A few cats and rats have also been roaming around. Daytime visitors are mostly birds, I will try and put a nice video together of the different species and what they get up to. There are plenty of snakes around and I would love to get one of these on video.

I find it fascinating that these animals share our lives, but we very rarely see them. Campocam has done a great job.

david: Fantastic post Kiersten.I like it very much and very glad you have already achieved to capture Genet and beech marten. Try to entice them with sardines and you will check the excellent results (if there are cats around, provide a few fishes more :) )...

david: Sorry, I had forgotten to say that.If you have a look on my flickr account you could see so many birds I 've captured with my scouting camera so far. The address is as follow: https://www.flicker.com/photos/94137302@N08/