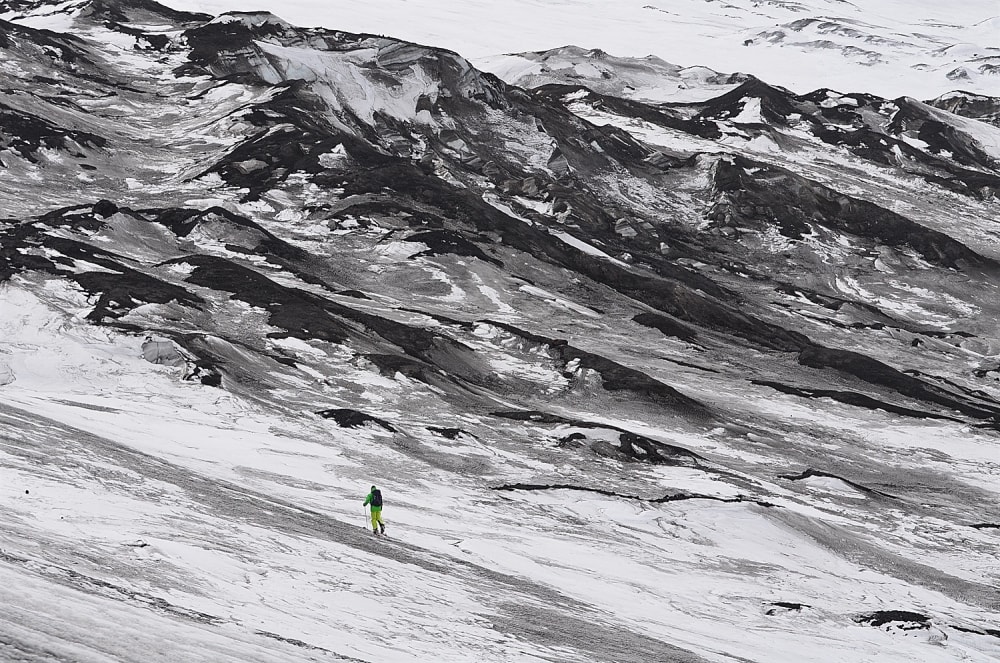 Here we are onto part 4 of the expedition. Most of the photos are Martin's, there were difficult times and photos were not on our minds, but obviously Martin was the expedition photographer, it was his job to capture life in camp. I'm sure you will agree he did a great job.

18th April :- Woke up to a frozen tent and no wind! Richard feeling better. After breakfast Martin did some Berghaus shots of Richard, I went along to take photos and learn from an expert. Crazy landscape everything has turned black and white from the ash. Makes Richards bright Berghaus gear look great though. Igor and Elena went back to first camp by snowmobile to pick up some stashed food and fuel as it looks like we will be here longer than planned. Out on the plateau they said it was really windy and mini tornedos were all over the place. Looking up at the volcano you can see the snow being blown off. Richard went for a little ski to test his bindings. I took some pictures of him, then we restrengthened the snow walls (told you it becomes an obsession). One mistake we realised we had made was not leaving much room between the tent and the snow walls to allow for snow falling (I have a paranoia about being buried in the tent after a near miss in Patagonia once). 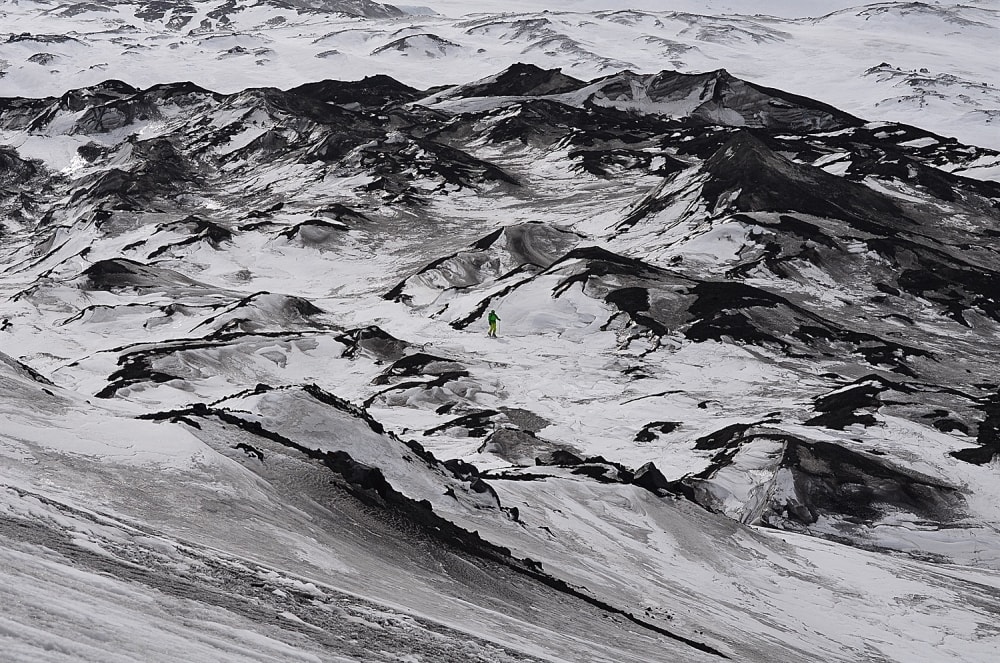 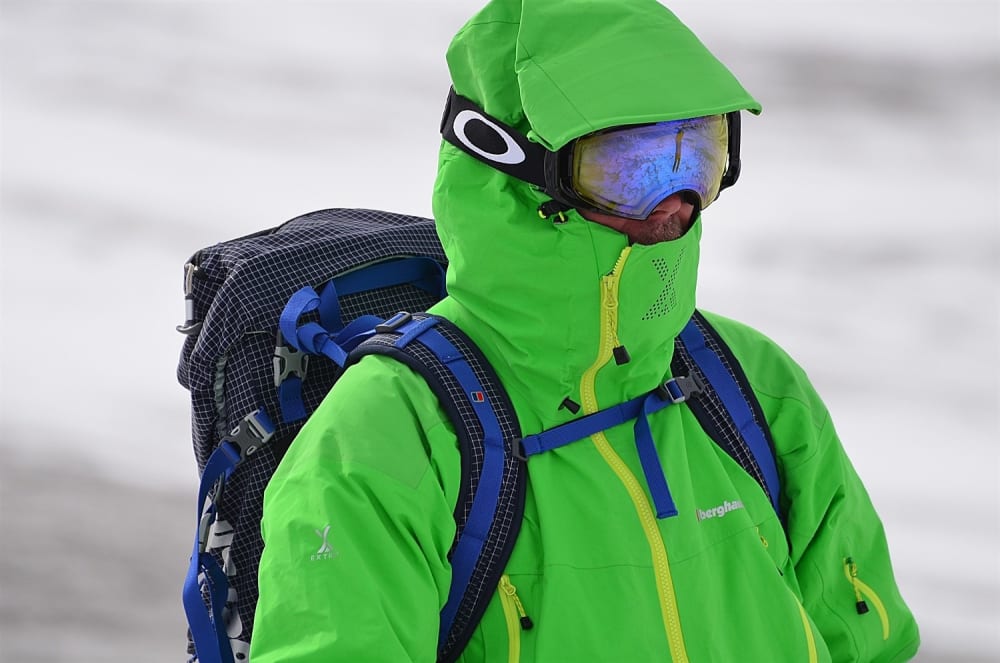 Warwick and Martin were out doing more Berghaus shots so I went to visit Julia in her luxury tent (well compared to ours it is much bigger), she platted my hair in an attempt to keep it under control. While we were chatting we heard a strange noise, it sounded like a bird, wow it was a bird, in fact two Ravens had come to visit us, the only wildlife we had seen in what feels like forever. After the initial excitement of seeing something else alive, I begin to wonder what they are doing here, are they messengers of doom? During dinner a Russian turns up!

He was part of the group of 12 who had attempted to summit today. Turns out they left the volconologists hut at 4am, got to 4000m but the wind was too strong. He asked if he could join our group but we do not have the food or fuel or tent space to have another person along. He had a warm drink then left to catch his companions. Weather forecast still showing bad weather. We had a game of 20 questions which was hilarious, we had to choose people that all nationalities would know. Richard chose Big Chief Sitting Bull!! Needless to say none of us got that one. During the night the wind became very strong, I used ear plugs to try and dull the noise. One of the worst things about camping in places like this is having to get up to go to the toilet in the middle of the night, having to put on extra clothes and boots, but at least my emergency toilet got used. 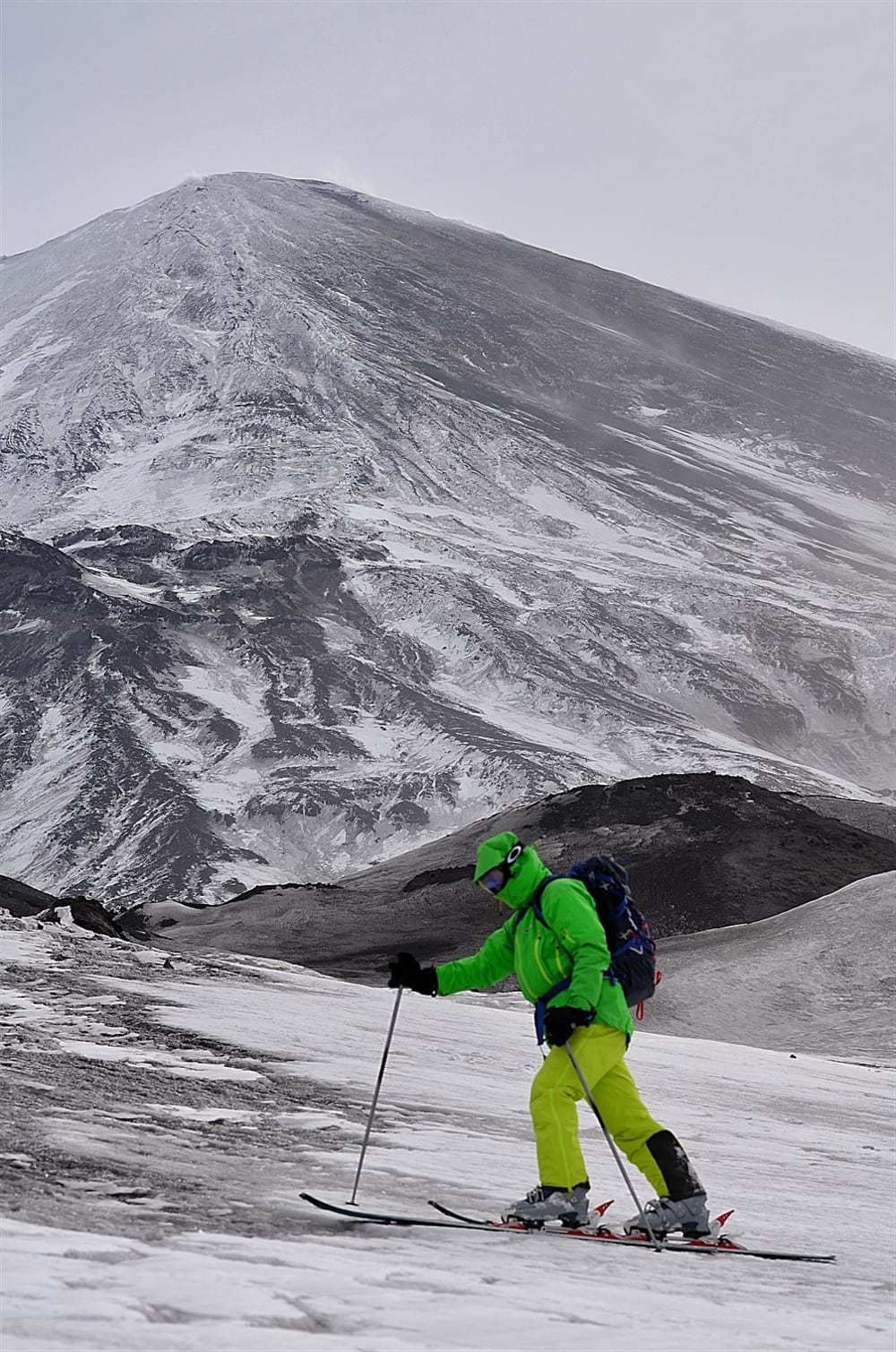 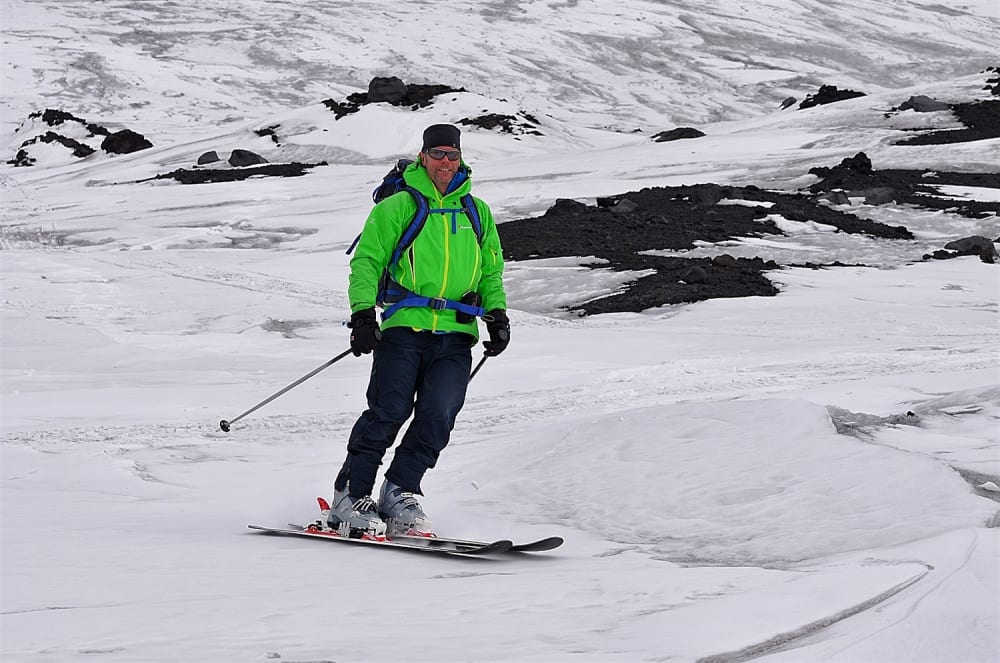 19th April :- Woke up to no wind but it was snowing and only -9C, another going no where day. The Ravens were sat on a rock in camp this morning, I am now convinced they are messengers of doom, you always see Ravens in horror movies, maybe I've watched too many horror movies or maybe I'm loosing the plot being out here in this harsh environment. But I'm full of admiration for them they don't have a tent or sleeping bag to protect them and none of us have any photos of them!! Only had a cup of tea for breakfast I'm just not hungry, it seems all I do at the moment is eat, drink, pee and sleep. It is starting to get tough mentally being confined to four walls of the tent with not much room, constant bad weather and everything being in black and white but at least it's not raining and has enabled Richard to get better. Summit plan number 3 was made today, if this snow does not get blown away we can go back to plan number 1, the quickest and easiest route up and down Klyuchivskoi. We were planning to redo our snow walls on our tent so we could dig ourselves out if need be, we got cold while in the kitchen tent so ended up back in sleeping bags to warm up and never got round to doing the snow walls. Now let me describe the kitchen for you. It is an area dug out of snow, deep enough so you can stand up. Benches to sit on are cut from the snow as are shelves for storing stuff and even a table has been made. The whole thing is covered with a flysheet from a tent. The news on the weather front is not good. It's time to dig in and make ourselves safe as possible. Wishing we had re done the snow walls. So cold in this wind and by 9.30pm the tent was frozen. 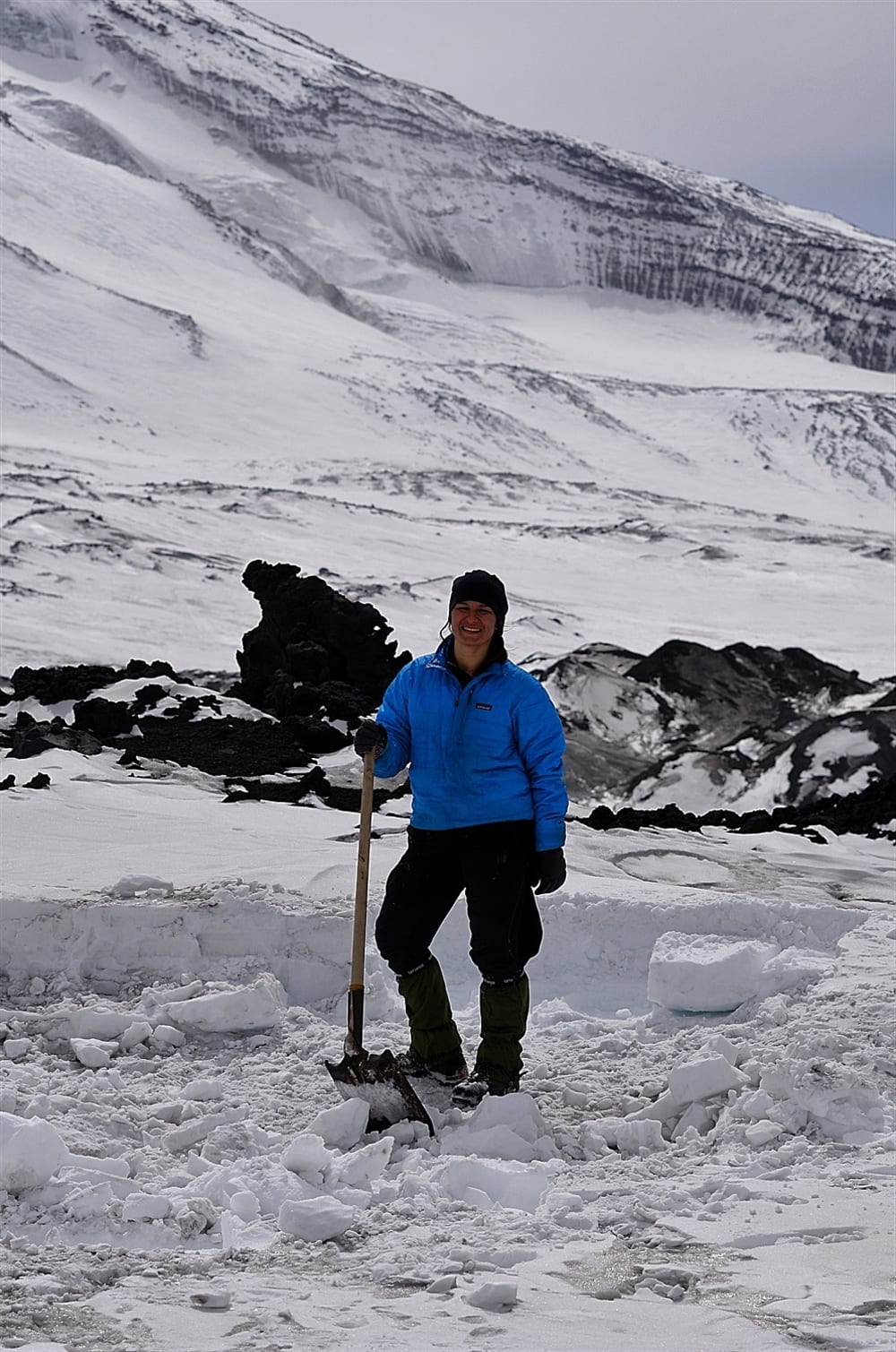 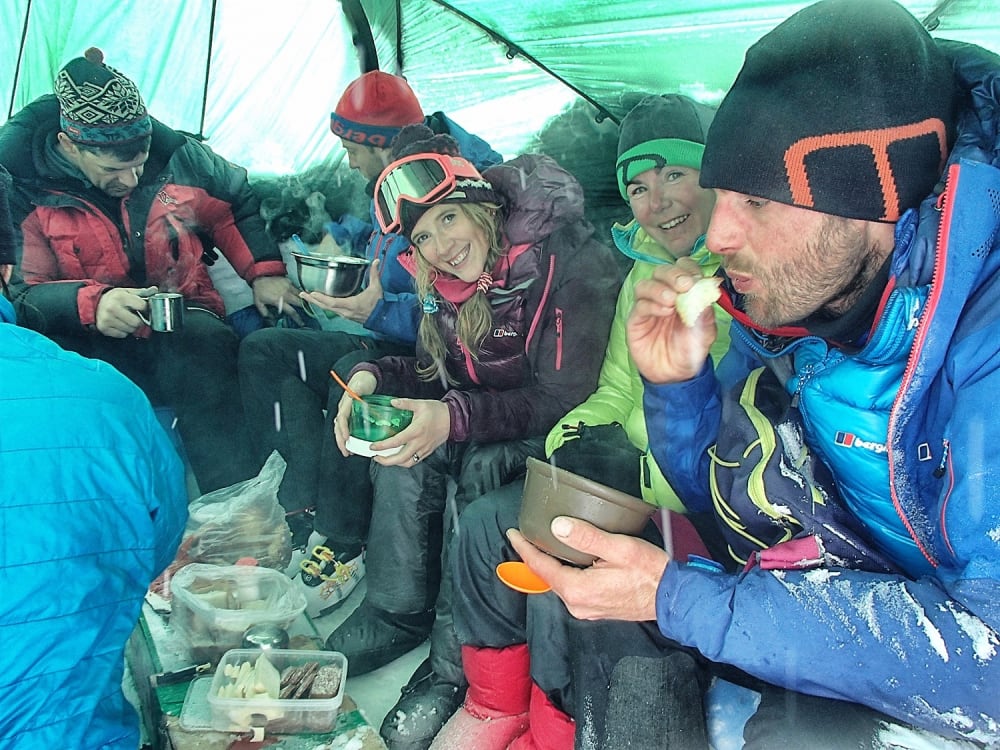 20th April :- Didn't sleep much, very strong wind and my getting buried by snow paranoia came into play. Once it was daylight, the world seemed a safer place. Sides of the tent are buried in snow. Porch only half buried but with such strong wind it blew most of it away. No visit from the Ravens today, can't say I blame them. It's quite difficult to stand up outside in the wind. Richard climbed over the snow wall and dug the sides of the tent out. I got dressed to help but Martin decided this weather was a good opportunity for me and Julia to do a struggling through bad weather Berghaus shoot!! So much for modeling clothes being glamorous. We have minus who knows what windchill, enough to make your hair freeze, getting blown over and covered in volcanic ash. The wind is so strong it is picking up volcanic rock and throwing it at us. Blimey it hurts when it hits you, I've been hit 3 times just doing the photos for Berghaus! Well we survived and Martin got the shots he was after. Me and Julia had a warm cup of tea with Elena afterwards.

Richard had to go to the toilet, said he thought he was going to die getting hit by rocks, not the way he wanted to go ha ha. Martin then took Warwick and Richard off to do photos of them. It's quite amusing seeing someone come in from outside as they are covered in volcanic ash. After warming up I went and rebuilt the snow walls and toilet (it got blown down) for the rest of the day. Had lunch and made a few more alterations to the snow wall where the wind had knocked it down again (we are expecting extremely strong winds tonight).

We have a bit of a competition going on with snow wall building, team Russia (Igor, Elena and Martin), team England (Julia and Warwick) and team Spain (Richard and I). Team England and Spain believe team Russia will build the best snow walls, they are the experts! We, team Spain, expected to come off the worst as our walls looked like turtle shells, we never calved our snow blocks, just stuck the shovel in and pulled. The sun came out for a while, it was nice to see but it didn't stay around long. You can hear the wind coming towards you, you turn your back brace yourself for the onslaught. I was watching Warwick repairing his snow wall and saw him get blown over ha ha. Igor has built a toilet snow cave, wow this is luxury, so quiet and warm in there. Time to rest and warm up before dinner in 3 hours! It has started to snow again and the wind is increasing. Had dinner but didn't stay long.

21st April :- Holy shit someone turned on the winds turbo button! What a night, the strength of the wind was incredible and it snowed all night. Hardly any sleep. The wind contained the volcanic rocks which weakened the snow wall and part of the snow wall ended up collapsing onto the tent, the snow is very deep in the porch. The rocks were blowing right through the tent, luckily for us we only got hit 3 times.

Very early in the morning we thought we could hear voices but were not sure, didn't want to stick our heads out the tent and thought if help was needed then someone would come to the tent. Turns out Julia and Warwicks tent got destroyed in the early hours and they had to evacuate into the kitchen tent. The volcanic rocks had blown straight threw their snow wall, through the tent and out the other side. They had to wear helmets in their tent, packed up ready to evacuate when it became obvious too many holes were appearing in their tent and the tent would not hold it's strength against the onslaught. They eventually left when Warwick was outside trying to mend the snow wall and the wind blew him through the snow wall and onto the tent!

Richard got up and dug the porch and side of the tent out, my emergency toilet had been destroyed! The wind is blowing everyone over, impossible to do much, trying our hardest to repair snow walls, everyone's tents getting ripped by the flying volcanic rock and for safety helmets are being worn in and outside the tents. Everyone is covered in snow and ice.

Emergency meeting called. Discussions about the rest of our time here. There appears to be no break in the weather for the next 5 days and we only have 4 days left before having to make our journey out. It seems Kluchevskoi is not going to let us set a foot upon her. After lengthy discussions and various scenarios thrown around, the decision is made, we get the hell out of there tomorrow in the slight weather window that should arrive.

With such a short time left here, only a spare summer tent left, which Julia and Warwick will use tonight, wet gear, frozen people, and the chance of getting stuck here by bad weather. It's very disappointing for everyone but there was no other option really. When things start to go wrong it does not take much for things to escalate out of control in an environment like this. A very hard (but obvious) decision for Julia with the pressure of sponsors for a successful trip, team members lives on her hands and also her own ambition of wanting to board this volcano.

As far as we were all concerned the right call was made. After the meeting we all help to put up the summer tent, build snow walls around it. It's still snowing but not blowing as hard but bitterly cold. We both had to come into our tent and warm up, my feet are incredibly cold again, they have become a bit of a problem and are really annoying me, but at least we are heading down tomorrow, weather gods permitting.

The rest of the day is spent in the tent warming up and drying out. The weather has turned sunny but cold with little wind. Please let it stay like this. The Ravens eventually came to visit once the weather had calmed down, you have to admire anything that can survive what just hit us. I fed them left over lunch. Team Spain came 1st in the snow wall building survival, team Russia was 2nd and team England was 3rd! -19C at dinner time. Ate food and went straight back to the tent to warm up feet again. Very calm and very cold night. Had a reasonable nights sleep.